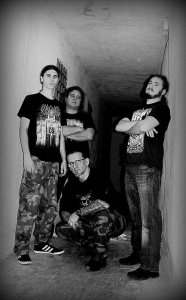 Additional notes
Formed in 1988, Aggressor were one of the most extreme acts in the Polish scene, initially featuring Piotr "Piecia" Paichert on vocals, Paweł Wirkus on drums, Stanisław "Menel" Jocz on guitars and Beni "Wujek" Gałązka on bass. After playing some concerts in their home city of Słupsk, Wirkus was replaced by Willi – introducing a second guitarist, Robert "Broda" Kowalczyk. The same year they recorded their first demo and went on tour in Poland, appearing on festivals like Drrrama and Sthrashydło. More formation changes followed, with the addition of Piotr "Piecia" Paichert and Henryk Kubała. This line-up would record a second demo tape entitled Notoric Drinkers.

With 2 demos behind them, the band shared stage with other underground metal acts like Vader, Wolf Spider and Turbo, recording a third one, Still Delirium in 1990 – the band’s last work in 15 years, being forced to dissolve due to lack of commercial success and some of the group members problems with alcohol.