Audio         Published on  March 19, 2020
Lyrics
IN BIRCHEN GROVES NEAR BABINÁ, THE NETHERWORLD MAGNATE HAS BEEN
APPEARING TO US

(Late October sun slowly sets above the town, a strange orange gleam lingers over the bushes and
shrouds the view above surrounding hills in a dolorous ambience, in which there is present also
something devilish. We are entering together, our dear reader, into the region of Krupina during
late 17th century. A region, where the old belief survives in secret fellowships of peasants, in which
though many times an esteemed townsman is conspired under the veil of night. We thereby ask the
reader for discretion, as things forbidden and explicite horrific shall be revealed to them in this
history.)
In birchen groves near Babiná
the netherworld magnate has been appearing to us
Once as a goat with black fur,
otherwile in the form of a lad
in red Hungarian garments
His feet were made of stone and eyes were like fists
In his name we were witching in the vicinity,
as well as other of his servants
Under different names they have been introduced to us:
Tartareus, Nikhardus, Black Field-Marshal
Tartareus, Nikhardus, Black Field-Marshal
On the Nativity of the Lord, Walpurgis Night
and the Birth of the Virgin Mary we held meetings
To renounce the Nazarene and his celestial father
And to enter into service of the archdevil
Tartareus, Nikhardus, Black Field-Marshal
Tartareus, Nikhardus, Black Field-Marshal
Dressed in precious Burgundy brocade was he
and reveal did he the secrets of the night to us.
(In the middle of a remote nocturnal meadow, a pittoresque gathering shoals in ungodly dance,
which to readers adept in aesthetics would surely evoke the characters of The Temptation of Saint
Anthony by Matthias Grünewald, residing on the famous Isenheim Altarpiece in Alsace.
Goblinesque phantasms, expelled by the very goddess Fauna from her domains, they rattle with
drums and bagpipes and mock all of God's creation. A donkey, a raven, a black dog and a maiden,
they all trample in a circle and fornicate in unnatural unions, accompanied by the guffawing gargle
of furry devils.)
In sodomitical fashion we have sinned
Saint Matthew's Hosts from the church we have trampled on
From pouches the horned captain has sprinkled golden ducats to us
A noble lord we have called him
The witches had candles thrusted in their behinds
and so they illuminated the eerie dark blue night. 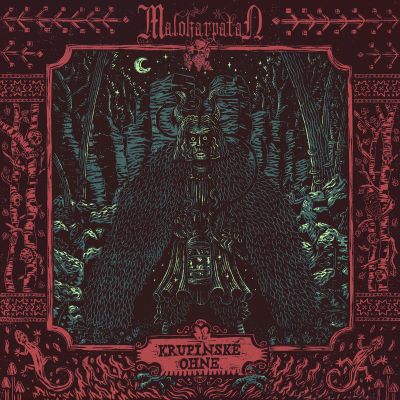