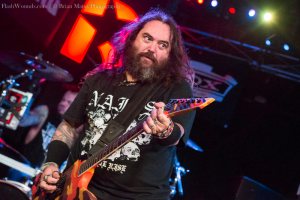 Additional notes
Massimiliano Antonio "Max" Cavalera is a Brazilian singer, guitarist, and songwriter. He was the lead singer and rhythm guitarist for the metal band Sepultura, before forming Soulfly in the late 1990s. Cavalera was involved in a short-lived side project, Nailbomb, and is currently performing with Soulfly and another project, Cavalera Conspiracy.

Max (vocals, guitars) and Greg Puciato (vocals, guitars) of The Dillinger Escape Plan started a new project in January 2011, later (March 2012) joined by Dave Elitch (drums) of The Mars Volta and Nate Newton (bass) of Converge, with Nate being replaced in October 2012 by Troy Sanders (vocals, bass) of Mastodon. It was named Killer Be Killed.

Despite singing Satanic lyrics in the Sepultura's debut album Morbid Visions and other songs, he has stated that his albums have all been dedicated to God, and he has often been depicted by the press as a man of religion, especially in America, something that Cavalera himself says he does not understand.

As he himself put it: "I do hate a lot of 'religion' but people like Christ - yeah they inspire me. I mean if you look at Christ, He was hanging around with the lowlifes, prostitutes and the losers you know, not going around with those high society motherfuckers you see trying to sell Jesus today!"

He is the older brother of Igor Cavalera.

He is married to Gloria Cavalera.

He has 4 Children:
Zyon, Igor, Richie, and Roxanne.

Richie Cavalera is his stepson.

Is the uncredited yelling voice of the Scorpion King in The Mummy Returns movie (2001).

In 1997 he sang in a TV commercial for Sprite in Brazil and he is the DJ for Liberty City Hardcore Radio Station in the Grand Theft Auto: The Lost and Damned video game (2009).

In 1996 he presented an episode of MTV's Into the Pit show.

Together with artists like Phil Anselmo, Joey Belladonna, Udo Dirkschneider, Brian Fair, Max Cavalera is part of the Metal All Stars tour.