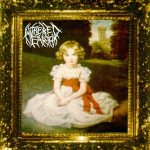 Album rating :  –
Votes :  0
8. A Violent September Moon (5:10)
Track rating :  75 / 100       Votes :  1       [ Rating detail ]
With, shadows at one, by the Wolfsbane bloom
This grim season Autumn come, Melancholia
strangled. Once fertile soils, Captive in the Deities
web. A new lord was born, not of the serpent
Nor the Dove, heavens abandon forbids the glow,
inferior to its essence. Zastras descended in that
mighty shape, crushed were the victims of belief.

Child of night, Howl at Nanna's gaze
Frozen were the forests where they stood entranced.

Show us of the portal, from which burns
Our desire, forever the Catacombs cry.
When he beckons from the third palace.

Desolate stars cease to shine, long since unorthdox
rule. Artuk Nurazuk screamed, from below the restless
sea. Splendorous dawn, you have long since passed
But your end is but the way of the weeping
Rose, fear not its savage grace, for the darkness
Has eyes, to many his minions have befallen.

Aakbal called to the storms which in turn blackened
the snow. Reveal what has loomed for centuries
It is he who bears the diadom within that somber gaze
He has spoken threw many nightmares
The Empress shed her spectral gloom, curse not
This realm untouched by light, tremors
At the break of dusk. The blind heathen broke from
its chains. Homage it given with the sullen rain.
To many his minions have befallen.