The Beer Is Here! / Drink Beer Be Free Lyrics 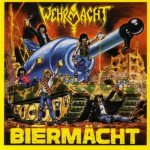 Album rating :  75 / 100
Votes :  1
3. The Beer Is Here! / Drink Beer Be Free (2:22)
What's the use in fighting a stupid meaningless war?
They say that they want peace, but they keep buying more and more.
I don't support these traitors,
it's something I won't do I'd rather get the friends together,
reef and drink some brew,

We can scream in their face and they still don't listen
they're fully set in their ways
Don't give up, but just face the facts
the world has seen better days

You're old enough to kill at 18,
but much too young to drink,
it's not that it stops us anyway,
it's just stupid, don't you think?


I love brew and it loves me
we have fun religiously
Fuck their war,
they won't get me 'cause life's too short to pay their fees

If I only had a beer for every bomb they have built,
To get it shape,
we drinksercise and pump aluminum.

Draft beer, not me,
Drink beer, be free