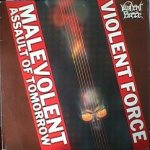 Killing technologies stand over all
Outer space war is the law
You ask for the reasons, but nobody hears
Shut up and don't spend no tears
Production, destruction, senses wars
Warfare into mercyless death
Living in fear you don't wanna hear
What they shoot up into the stars

S.D.I. you'll never know why
Suicide Death Inquisition!
Your only right is to wait 'til you die

They rule the Earth, bullets fly
Stupidity fills the scene
Die and bleed out reality
There's no place for you to be
The end is near feel the heat
Nuclear war has begun
You laugh over what you don't understand
Oh God, what have they done?

Where is our world, explain it to me
Look through the nuclear fog
The end is the right thing to get free
Insane pure hated shucks
Congratulations we've got it right
The never ending night
Now it's too late to lose a word
The signs of the dead, shine bright