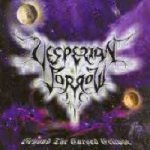 Album rating :  –
Votes :  0
5. Calydon (07:43)
Not by sunlight nor by starlight is it shone
Nor to the full moons eye or others beings known
Beyond the hallowed sunset eres a perfect star
Above the sweep of havens showing afar

Unrobed and thus untrammelled
Unveiled and presented feel thy strength

Shone from an unforeseen universe lost in sight
Across horizons of endless time behold, beautiful
Forgotten and unknown for countless centuries
The most cosmic spacescape withstood elements beckoning
Ancient moons arise awakening every eve
Gleaming upon cold still shallows reflections emanate
Forth all planets vanish leaving one mighty one
Laden in the tempered hallows glimmering glorious

Beyond the Cursed Eclipse - Lyrics