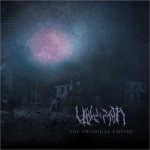 Album rating :  86.7 / 100
Votes :  3
4. The Prodigal Empire (3:10)
Contagion, the decay of the sun
Crawling, feasting on us
Wasting our flesh, ourselves
Free to roam endlessly, society is withering
A giant wandering, driven by its plague
Seeking to leech the land; to feed from the rotten hand
Begging for more
Nirvana from the ash
The body is collapsing from within
Threatened by its pathosis
The end is approaching, pulling us toward our demise
And yet this entity, which wallows in its misery
Continues to tear the skin from its bones

This is the end

The Earth has gifted us with our extinction
And so it shall be
The giant falls from its gluttony
Buried by the Earth, and swallowed by the sea

Lust, gluttony,
Greed, sloth, wrath, envy, pride
Preached to us from the
Twisted words of faith