Under a Diabolical Fullmoon Lyrics 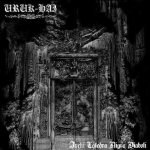 Album rating :  –
Votes :  0
5. Under a Diabolical Fullmoon (4:15)
Funeral winds of hatred lash black night from hell
Apocalypse trumpets sounds on desecrated heaven by demons
On earth, fire burns woods full of dethroned crosses
And churches are destroyed by monstrous creatures
Damned monks are prepared to guide shadows and specters
Iron and holy souls are melted together
And the nameless gate is opened on fog mountains
Three demons awake in front of you, with secret names
High fortress breaks night silhouette
Damned arise from their graves in rotten shrouds
And attack world of faith with sickly dreams and nightmares
Damned monks are prepared to guide shadows and specters
By paths of mist and ruin, light from a candelabra made of bones
Illuminates night of the dead without eyes