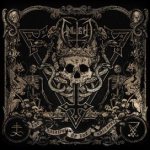 Crumbling the pillars of the Universe! Promethean Might! Capable of moving the Stars!

Red Sulphur. Violent and Diabolical element, Fiery destruction of things. The heat in which all things are forged!

Black Sulphur. Alchemical Marriage between creation and destruction. Oblivion of the finite and The Resurrection of The Eternal.

Crumbling the pillars of the Universe! Promethean Might! Capable of moving the Stars!

The Rising up of a Dying Man into the Glory of a God! Sacrifice of all things for that which cannot die!

Shiva The destroyer! Sulphur is the purifying Agent! Unleash this element unrestrained!