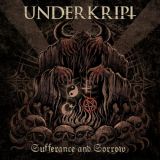 Religious freedom isn't a law that gives you right of way

It's a false ideal that you live by, keeping logic far at bay


You all follow a prophet, who raped and pillaged, his way across a land

A religion of peace is a concept, I will never fully understand