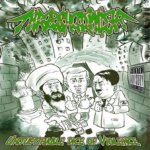 Fire, rocks, toxic sticks
No surrender, No remorses
Assault, Attack with no turning back
Slaved away all day to pay the tax

Accept the consequences if you cheat the laws
That's what the power offers you
For all those years of fucking work
Don't offer me a limited future with those
Obsolete solves
Don't you have idea of the fucking living cost?

No surrender, No remorses!
Protest, complain against the forces!