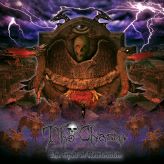 Album rating :  93.3 / 100
Votes :  7
5. Fortress (5:05)
Track rating :  100 / 100       Votes :  1       [ Rating detail ]
The blasting echoes of a real perception
a virtue of those who have perished
and for their everlasting dominance I sealed my fate
a will so strong it vanishes the damnation
Yes, the power to reign, to dominate again
in fury and in honor, through my eyes I seek the lost torch
visions of my inner conflictuality, joined by the birth of Mourning
Blood-Red sun bathed crypts of Abysmal Chaos
Since the early stages of this defined Retribution
Never surrender, and fight 'till the end
So we walk in grief, but we march in Victory
because this destiny is my own creation
Failure is unknown, Triumph is the all.
Hammering the last nails of their Fragmented coffins
(a symbol of their own impending defeat)
Rebuilding the Fortress...

The Spell of Retribution - Lyrics