I: The Vomiting Tchornobog (Slithering Gods of Cognitive Dissonance) Lyrics 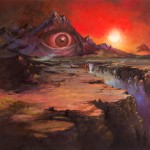 Perpetually disemboweling, self-devouring beast of primordial desolation...
Have you a single orifice from which you have not vomited?!

"We are the waves of mire upon our father
Whose eyes are complete, whose sensory organs are overstimulated
An enemy of blindness, we feel EVERYTHING
We march as vessels for abhorrent life
Plucked from the calm void's rest
To be summoned unto this slave nightmare"

The shroud of the sky was lifted
Darkness no longer alone
A fire sphere of one pierced throughout
It came through the clouds, this white light of poison
Undressing the mountains in imperial failure
It traversed a vast emptiness
Of a billion kilometers between It and Earth
As if, by design, to cast belligerent hellfire
This Helios exhudes achromic death
With it's tongues lapping at the reflection of itself
In smouldering obsidian

Convulsing animus obsolete!
Your bodies ebb, stigmata weakling!
Rise! Devour those not of your legion!
Arise! Act as the God you are!

It bled from my Eye

Anubis, Hecate, Dis Pater, Namtar, Set, Hel, Kali, Lucifer...
Many names have you traversed, void creature
In human tongue, brush, blood, and pen
Many eyes are undeceived, these psychologies in vertigo
They simply attach a name to what they can’t understand

But one disposition is true...
AS THE HUMAN AGES, SO DOES GOD!