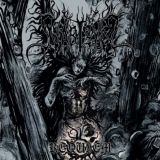 Album rating :  –
Votes :  0
4. The Desolate (8:30)
A spirit of the netherworld is awakened through the coming structures of a coming temple where all dreams transform into anarchistic nightmares.

A world deceived and worshipping the image of the beast.

Rising as two through pestilence and anarchy. Deceiving and with a voice louder than any god and with great words of blasphemy.

A spiritual leader with a lying tongue vomits verses of establishing world thrones that will stand for a thousand years.

A second beast that will rise speaking greatly to deceive many and morphs his presence for deception, naturally without changing its nature.

When the world spiritually subject the beast every tongue and mouth shall bless the coming Luciferian world religion whose thrones grows on human souls. Sodomy and Blasphemy will be common.

Thrusting in fornication in matrimony with Lucifer's deception and glory.