In the Ghoul-Haunted Forest Where the Winter Was Eternal Lyrics 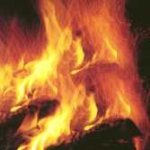 Album rating :  –
Votes :  0
5. In the Ghoul-Haunted Forest Where the Winter Was Eternal (7:03)
In the forgotten ancient forest of evil,
Where the winter was eternal.
Once again the blood will drip,
From the shadow that hangs in the rope.
In the mooncursed grimly forest,
Where the winter was eternal.
The painful screams echoes,
In the dark forgotten sky.
Once again the moon glows clearly,
As the tears once again touched your lips.

The winds of deeply sorrow.
Deep as the deepest ocean.
In the ghoul-haunted paths of the forest,
Where a man used to walk.
Long time ago he were totally missing, gone.
After few years he were forgotten.
But he has now been found.
Totally dismembered and burried under leaf.

A corpse is found with all its bones broken.
Centuries ago the beast ripped his heart out.
The time has come for the return.
Alone in the night I walk... WAITING