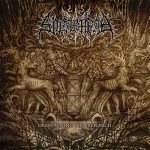 Album rating :  –
Votes :  0
9. Mors Triumphalis (5:15)
In battle itself is the power to arouse and awaken supremacy
Beyond victory and defeat is the only virtue we surrender to

Enslaved, the powers of chaos and fear, and passion that blind the fight
Above pleasure and pain, and gain and loss, surpassing moral chains
In his cell, his pallid telluric confine, man subjects himself
Inaction, desire - secular defects that war shall transcend

Light against raw power, the divine path, a symbol of triumph
Conquered, the crisis of corporeal death - Victorious peace

Whether through gain or defeat, impulse shall always hinder
Death triumphant conquers indolence and man’s emotions

Whether through death or victory, the ascetic shall always ascend
Death triumphant conquers storm, blood and misery