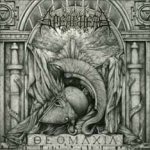 Album rating :  85 / 100
Votes :  1
7. Herald the Lightning (5:00)
Lay waste the earth on winged steed
Exterminate in their thousands those thieves
All those who dared to dress as kings
And wear the raiment of mastery

Tenth and final avatara, who will set the bounds of cosmos
Great striding blood-avenger of the cleansing storm
That sets ablaze horizons, entombing Age of Iron
To sire those god-kings who will live a thousand years

Who fire brings, and ushers in the new age
And crushes earth with the great stamp of his heel
Who winter brings, to purify the whole earth
From all those by indolence swollen
Who cleanses both of the world halves by truth
Inaugurate the sons of gods on earth
Blood revenge, to slay the wolf unleashed
Which bit the hand of the august god of order