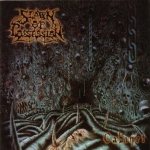 The one supposed to be above can't
Undo what the evil has already done
Within these walls of dirty death the
Reign of unholy is spawned
The family happy, with joy in their eyes
Unlocked it and brought it to life
For now they will desecrate something
Untouched and evil shall suffer their son

The boy was marked the force of old wanted his soul
He felt it, coming as it took control
Beyond all penance, the boy was bound to serve

Screaming, convulsing from the pain
The boy is now possessed by the house

Window, infested with flying vermin
Stalking, feel it's all around can't touch it
Voices, tell him to obliterate his family

"Look at them, they're pathetic"
"Kill them, you worthless swine"

Believing the words that were spoken
The house gave him strength to make it happen
He did it at night while they were sleeping
To fire the gun felt overwhelming
The familty stood without protection, for the
Amityville horror was now upon them