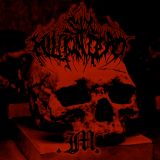 Album rating :  –
Votes :  0
2. Suicide Cultist (2:24)
Their church was built over her father's grave
It was in a moment as she lay on her back, that's when she had her vision...
As the "Virgin" appeared to show her the way
She changed her life and found the light
But it was "The Prophet" who swept her away
Together they would spread the word of God and began their obscure movement.
Only to lead hundreds of followers to their deaths

As they all prepared for the apocalypse...but the end never came!
So they began to question their leaders and "The Prophet" was under pressure.
In an act of desperation their world had to end...

Their prayer mats were doused in gasoline
Then the church windows and doors were boarded and nailed shut and there was no escape...
Innocent Men, women, and children were all trapped inside.
They all sang and chanted for hours...then their church was set in flames!