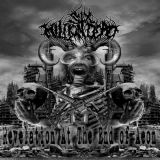 Darkness covered the Earth, darkness reigned supreme
As Jesus Christ was crucified, upon the cross he hung high
Died for mankind's sins, his last hope for humanity...
but evil endured as mankind killed there own God...

A world now filled with death, war, and envy
Mankind became corrupted by their ignorance and greed
As the innocent were forced to become slaves
And so new Gods were created and the true God was forgotten...

Darkness covered the Earth and darkness reigned supreme
For mankind needed no God, knowing the secrets of the Earth
As greed feeds on their souls, they will stop at nothing for domination
and to claim the world for their very own.

...Centuries had past and God abandoned Humanity
knowing that one day they will seek salvation...
Although he was betrayed upon the cross where he was slain
but in his heart love conquered hate knowing they will return some day...

Like a plague Humanity spread across the world
destroying an Earth that was hand crafted by Divinity
War after war, death after death, dominated by their own greed
Taking and taking, killing and killing, never fulfilling the hole that burns in their souls

Many centuries of war and ignorance, have now caught up to them
Mankind had no control over their own world
and all the Earth was destroyed,

Flooded by death and disease
and all the Earth was covered in darkness
With no hope left they all fall to their knees
and pray to their God begging for salvation...

The second coming of Jesus Christ!
He's finally come to restore the Earth!
And to save his children from war, death, and evil
And so the Earth was restored to it's natural form
and mankind was given a second chance

...but evil allowed to endure
As mankind's hatred grew against their God who abandoned them
and let them suffer for centuries, but now they shall prosper once more
As the past has caught up with present
So it was clear that they needed no God...so they crucified Jesus Christ!