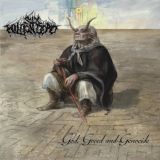 Album rating :  –
Votes :  0
1. Demonization (4:38)
Memories haunt me from a distant past...
Are they just made up beliefs or really living nightmares?
Visions of a constant absolute terror...ritualistic attacks and gruesome rituals

Did the innocent really give themselves willingly?
Or were they mind controlled and lured to their own deaths?

I'm unable to make sense of what I've done
But I'm the last person they see before they die
I have no choice but to take their lives or I will be the one to die!
To them this is the greatest gift by committing the ultimate sacrifice
Taking an innocent life; to strike fear and appease their deity

The haunting chorus fills the air and I feel it's power
Surrounded by chanting dark figures in robes
Gruesome images as I now hold the key
The power controls me and then my memory fades away...

No one believes me and I don't expect you to understand
But what they did to me...
There will never be no healing help for me!
These people they took me to hell...and once you've been to hell...you're never coming back.