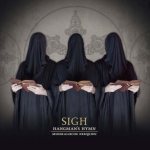 Album rating :  85.7 / 100
Votes :  12
6. Death with Dishonor (3:04)
Track rating :  95 / 100       Votes :  1       [ Rating detail ]
Let the weakling see the truth
Their lives lie there to be abused
Hiding behind the inner peace
All the pleasures will you lose?
Salvation is an illusion they give you with malice
The truth remains concealed in the chalice
You know fears just deafen your ears
You know fears just blind your eyes
I may be burned as a sinner
I may be hunted as a saint
I may fall down as a winner
I may bleed but am I insane?
We never fail to sate your greed
Your fate to bleed with the demons seed
So listen to us now, you know what fear is!
Obey! I don't believe in glory after death
I need it now. I want it now
I don't believe in torture after death
I'm glad to be burned if it's my fate
I don't believe in fame after death
You need it, you want it now!
I don't believe in losers illusions
I refuse to live in dreams
I deny their lies on which you rely
The gate is closed, it's to late
My mind's eyes defy, they fly so high
I won't wait for my fate
Vengeance now, time has come
Vengeance now, it's your war
Vengeance now, time has come
Vengeance now, start your war
Every thing is going as I planned
Everything is going as WE planned