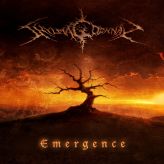 Album rating :  91.4 / 100
Votes :  13
3. Edin in Ashes (6:19)
Bitter is the taste of my contempt for those
protecting their dreamscape; as such becoming foe
of humanity and reason; for truth they can't endure
Reality denied; like sick that fear the cure

I paint myself with the blood of life
so cruelly culled by the hands of Adam
Armed with hate and malice; for millennia to come
and with the vengeance of that
which will be coldly laid to waste without regrets

Unknowing was our kind, when he was made to be
a demon in holy skin, whose light has blinded ever since
and inspired foolishness for generations to come and last

Life just runs its course; no entity to blame
No swarm of spiteful locusts, to plunder in his holy name
I've seen both past and future; the rape of life to be
So I will do what must be done; revealed to me

The glorious destruction of both religion and mankind...

There is no action without consequence

As I freed myself from the clutches of guilt
One cannot change what has been done
The lesson learned alas my friends
the battle’s never, ever, truly won!

A man must fall to rise again.