The Physical Essence of the Devourer Lyrics 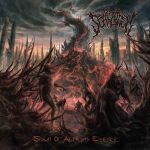 Album rating :  –
Votes :  0
3. The Physical Essence of the Devourer (5:23)
Track rating :  85 / 100       Votes :  1       [ Rating detail ]
The Creature completely opposite to the nature of everything alive,
Only His presence was able to irretrievably
Initiate a failure in DNA in several generations forward.
The Creature incarnated in physical form
Its sizes were unstoppably varying;
Sun radiation was accelerating metabolism –
The creature simultaneously occupying
All the space around the Earth,
And was able to shrink into the sizes
Of small asteroid.

The Creature connected to the collective unconscious –
Informative field of humanity,
Which had all the experience
Of billions previous generations.
In the shares of seconds it found for itself
The most awful incarnations of mystical creatures,
Which were giving primitive fear to humans from the immemorial.
Remotely the Creature was reminding
A hybrid of prehistorical insect,
Of anthropomorphic shape:
From its body were constantly coming
low-frequency vibrations,
And multiple limbs were
shrinking and unclenching,
Grabbing the emptiness of open space.

In the meanwhile from all the corners of the Earth
Started coming messages about refusing
Of electrical appliances, lines of power and communication.
Upper layers of the atmosphere have been tighten with muddy
And always changing its structure substance.
The Creature without hurry was begirding with its body all the planet.
Here and there the cocoons were falling on the Earth,
Bursting under the force of gravity,
Disgusting wormlike creatures were creeping out of them
Penetrating in everything alive.
Some cocoons, which were being dissipated by the Creature,

Were getting burned in the atmosphere and liberated larvas
Were literally covering the whole surface with a rain of slime,
For dozens miles around.
Music Video