The Return of the Undead Smurfs (Gargamels Revenge II) Lyrics 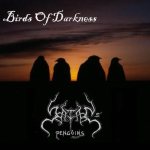 Album rating :  55 / 100
Votes :  1
6. The Return of the Undead Smurfs (Gargamels Revenge II) (6:30)
Out of the ashes
Of the destroying (smurf) village
One survivor rose
That day he swore not to rest
Until Gargamel was dead

He was paralyzed by the horrifying sight
When he saw the hideous army
Bursting out from the midnight fog
Crawling and trembling towards his home
He tried to escape, but they ate his toes
(took a bite of his ass, played golf with his balls)
And feasted upon the rest of his dismembered body

When it was down, they marched on
To spread terror all over the world
The superior race of rotten flesh
Blue and white with blood on their hats