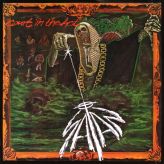 Album rating :  91.9 / 100
Votes :  11
5. Broken Treaties (4:44)
The white-man ravaged the frontiers,
The hunting grounds and the plains,
Their braves were slaughtered in thousands,
The blood was falling like rain,
The treaties were signed and the white-man smiled,
While twisting their knives in their backs,
The whole Indian Nation, was facing starvation,
A net of illusion, was squeezing the life from the tribes,
Their women were tortured, their bodys thrown into the flames.

The flaming arrows were flying,
And smoke rose up to the sky,
The Cavalry kept on charging,
The soldiers never asked why,
The Chiefs still believe that their people could rise,

And unite in a final attack,
The treaties were broken by white-mans's greed,
They fought for their freedom, bought with blood,
The Cherokee Nation, Shawnee and Souix,
A million war-braves, in surprise attack.

Court in the Act - Lyrics