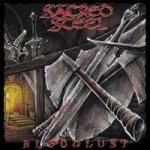 Album rating :  75 / 100
Votes :  1
6. Sacred Warriors of Steel (5:12)
([XU:] "You must wield the Powers of the Sacred Stones ! Do not falter, True King ! Yours is the Force and the Knowledge of the True Gods ! Summon the Wraith-Legions from the Lands of the Dead ! Brave comrades of Battles fought long before the Fall of Cultures even the oldest Legends tell. The Demon-Lord has already carried through the Rites of Resurrection ! The Dead must join the living ! You must take heed the Prophecy ! Now, wield the Crystals and set their Spirits free to kill again !")
([THE EMPEROR:] "And the Phantasmagoria becomes reality !... I see the bridge... I hear the hooves of Metal sound... My Fathers and Forefathers have returned to join me in my Quest for the Traitor. The Hunt is on !")
[Memories of the Wraith-Lord-General:]
[THE WRAITH-LORD:]
"Across the bridge we came from Times beyond
Communion of the Sword of Blood
The Elders watch and guide us 'til the Battle's won
Destruction of the Enemy of CROM !
The Time has come for us to meet our Destiny...
And proudly our Banner is unfurled !
Son of the Sun, lead us to carnage Victory !
Let Blood run red in streams through this Battleworld !"
[THE ARMY OF A'RYTH-RA:]
"We fear not Death nor Witchery !
([THE EMPEROR:] "BUT WHAT IS THE PRICE, MOTHER ?")
Strong is our Belief !
([XU:] "DEATH ! ENLIGHTENMENT ! AND THE METAL THRONE !!!")
Inscribe our Tale in Legendry !
IT'S TIME TO KILL THE BEAST !!!"
(And the Wargods themselves rejoice at the sight of the Gathering !)
[THE EMPEROR:]
"WARRIORS ! (Wear your Spikes and Chains with Pride !)
Warriors of the Final Fight !
WARRIORS ! (Let Honesty and Truth prevail tonight !)
Soldiers of the Grace of Light !
WARRIORS ! (Where Steel and Blood in Death unite...)
Uprise and crush them on Fate's wheel !
WARRIORS ! (...there the Old Gods bless the Fight !)
RIDE SACRED WARRIORS OF STEEL !"
("What a Night of Splendour ! What a mighty Incantation !")
"Wraith-Legions rise, Black Lords of Death and Force Divine
I call thee forth from Hades by the Wicked Sign !
The Treasures gleam, (and as foretold in the Prophecy) I am the Warlord and the Seer !
Their rotten shapes take form and in the Fog they do appear !"
"Immortal souls of Warrior-Kings of Times long gone
Stand side by side with Brothers living, proud and strong !
Where Death has failed, Damnation's Claws of Hell await
We march as one for Victory. THE CARNAGE SHALL BE GREAT !!!"
(And the ELDER GODS watch the disregard of their Authority in disapproval ! Weaving Aeon-spanning Spells of Annihilation and Despair to crush the arrogant deities...)