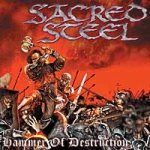 Album rating :  75 / 100
Votes :  1
10. Plague Of Terror
Can you feel the cold chill in the air
Damned souls - They have risen from their lair
Can't you read the signs - They're clear to see
Death immortal claims mortality

"Ladies and gentlemen. This will be our last broadcast.
Evil incarnate has conquered our world.
It seems like there's no way to escape the wrath of the undead legions
that have emerged from hell.
May God be with us! Harris Johns for CNN network."