Last of the Mohicans Lyrics 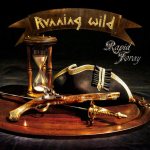 "Today I buried my son.
No father should bury his son,
Especially, when he is the last of his tribe.
Today my heart is bleeding!"

''Hawkeye'' and the indians right on his track
Hunting jim down in the attack
''Magua'' flees, becoming a ghost
So ''Fort William-Henry'' a shelter supposed

Pre:
His soul's flying on the wind,
The valleys to roam
Free on the hunting grounds,
''Manitou' gave him a home'

All soldiers dead, the two girls are gone
''Unkas'' to follow to ''Delaware's'' home
The sign of the ''Tortoise'' is saving his life
''Magua'' flees to make ''Cora'' his wife

Follow the ''Huron'', to bring him to death
Grinding his tribe, taking its breath
''Magua'' is running and two of his men
He drags along ''Cora'' right by the hand

Right through the cave, abductors are trapped
The death of the cliff is holding them back
''Cora'' is murdered so ''Unkas'' attacks
By ''Magua's'' knife he's stabbed in the back

1757 the story began
''Unkas'' had died right at the end
The ''Mohicans'' fade, the end of the tribe
''Chingachgook'' robbed of his pride