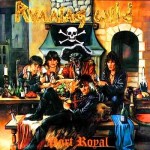 They fight, they kill, they rape
Under the banner of the 'holy' church
They hunt, they lie, they cheat, they steal
Doing dirty deeds under churchbell's peal

Pearls of glass for ingets of gold
Violence, force and deceit
Taking the wealth or the Indian's life
Their way of feeding their greed

Heathen must turn to Christianity
It's like 'believe or die'
Arrogance and blindness, religion's force
Believers never ask the reason why