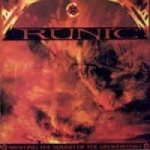 They were waiting for the nightfall
When wolves slept, the stick of sway
Was snatched from its room
But the winter saw what they had done.
And the wind blew towars the shining wisdom well
Where the supreme fighter was keeping watch...
So they were destined to die at dawn
When the early rising horse touched the sky
And it lighted up their haunt.

Then he went hunting for the midnight thieves,
Guided by his ravens, throughout the nine worlds,
Attracted by the smell of fear just like worms.

And a dull caw was the encounter sign
Between the hunter and his prey.
The morning clouds began to cry,
And his anger became unstoppable,
The fighter rushed the intruders group,
And a lightning crossed the tears.
Thousands of bits of flesh and blood
Remained on the battlefield.

And the storm let the calm by...
And he took again what him was (made)

And each bit of their entrails
Were spread along the southern lands.
Being condemned to be conquered
And annihilated.
By the great fighter sons
Who should show for ever more
The price of playing with their gods.