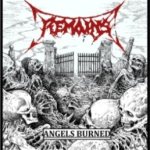 Album rating :  –
Votes :  0
11. Livin' Hell (Edge of Sanity cover) (4:30)
Twisted mind, malesting your own seed.
Yeah, bastard father you make me puke!!!
"Your own flesh and blood"
You're killing your own breed
to satisfy Your macabre needs.
She's afraid to tace The outside worl.
A well-known hell before an unknown paradise.
She's trying to kill her memories,
but she ain't got no weapon!!!
Yeah! She lives awaiting the end.
Livin' hell
She's doomed to descend!

The way she's living, the way it is.
She doesn't know anyother life.
Don't tell anyone "Be daddys little girl"
Scared to silence--scared to talk,
noone listens, noone hears.
They won't believe their livin' lies...
She only knows one way to end it:
To stop to funktion, to make it end