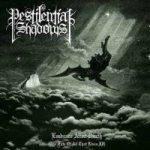 There is no shelter or hiding
from infection and infestation
rolling in lika a storm the carriers of Death
the plague eclipse engulfing humanity in it's blackness...

Your only comfort will be Death!