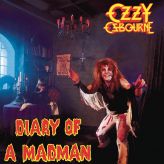 I can't believe they stop and stare
And point their fingers doubting me
Their disbelief surpresses them
But they're not blind, it's just that they don't see

I'm a believer, I ain't no deceiver
Mountains move before my eyes
Destiny planned out I don't need no handout
Speculation of the wise
Audio

Diary of a Madman - Lyrics