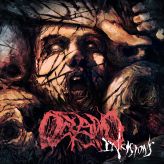 Album rating :  62.5 / 100
Votes :  2
1. Eternal Wasteland (3:01)
I'll raise a toast at the end of this world,
When God doesn't love you anymore.
An aborted birth at the hands of the father.
A fist full of insignificance
Intended to be spit out,
Or flushed down.
I'll savor the end,
Savor the end of you all.
Humored at the thought of lives lost,
Renouncing existence you're surely better off.
Since conception humans quickly earned the crown
As bastards sons, the unwanted crown.
At the end I will stand alone upon hallowed ground.
Bodies beneath my feet,
Watching earth transform,
Into eternal wasteland.
A massive unmarked grave of decomposing corpses,
The aroma of death,
Spread across the globe.
Blackened skies blind the few whom survive,
Covering the flaming landscape!
Depletion of human existence,
We now share one common goal;
I want you dead,
Dead in this wasteland,
Dead.
I await the final breath of man.
I want you dying where you stand.
The soil becomes your eternal home
Once the world transforms to a wasteland.
To a wasteland!