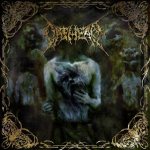 Album rating :  67.2 / 100
Votes :  14
3. Two Faces (4:43)
They hide and destroy themselves to the bottom of despair and evil
All those reasonless evil sins… thorough egoisms without even feeling guilty

Leading his life with two faces
Sold his soul to evil, as he has two faces