Annihilation of the Wicked Lyrics 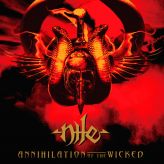 Album rating :  94.8 / 100
Votes :  32
9. Annihilation of the Wicked (8:37)
Track rating :  97.5 / 100       Votes :  8       [ Rating detail ]
The Dominion of Seker.
Barren Desert of Eternal Night.
Shunned by Ra.
Behind the Gate Aha-Neteru.
The Wastelands of Seker.
Eldest Lord of Impenetrable Blackness.
Death God of Memphis.
He of the Darkness and Decay of the Tomb.
He of Rosetau.
The Mouth of the Passage to the Underworld.
Closely Guarded by Terrible Serpents.
Who Careth Not for His Own Cult of Worshippers.

Seker.
Ancient and Dead.
Primeval Master of the World Below.
Remaineth Unwitnessed, Unseen, Hidden in His Secret Chamber.
His Primitive Graven Image like as a Hawk-headed Man.
Shrouded and Swathed in Tomb Wrappings.
Standing Between a Pair of Wings which Issue Forth from the Back of a Monstrous Serpent.
Having Two Heads.
Having Two Necks and Whose Tail Terminates in a Human Skull.

In Thick Darkness.
Amid Violent Tempests of Unendurable Cacophony.
His Serpents Make Offerings unto His Image and Live upon Their Own Fire.
His Servants.
Hideous Reptiles of Terrifying Aspect.
Whose Work is Nothing Less than the Annihilation of the Wicked.
Consume the Bodies of the Damned by Flames of Liquid Fire They Emit from Their Mouths.
And the Goddess Quetet Tent which Liveth on the Blood of the Dead.

On Their Blocks.
They Cut into Pieces the Flesh of the Dead.
Singing Hymns of Torture and Mutilation to Their Master.
Accompanied by the Wailings and Anguish of the Damned.
They Wreak Destruction upon the Wicked.
Those Who Hath Not Recited the Formulae.
Nor Made the Sacrifices or Who Know Not the Words of Power.

Annihilation of the Wicked - Lyrics