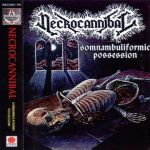 Album rating :  –
Votes :  0
5. External Reality (3:04)
One butcher worked at the mincing works
He put meat and bones through the mincer
He dismember corpses and carcasses some more
The whole year round to abstinence

He died many years since
I haven't seen him since