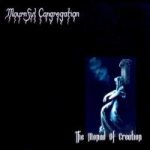 
(So spoke he weeping, and his lady mother heard him as she sate in the sea-depths beside her aged sire. With speed arose she from the grey sea, like a mist, and sate her before the face of her weeping son, and stroked him with her hand, and spoke and called on his name: 'My child, why weepest thou? What sorrow hath entered into thy heart? Speak it forth, hide it not in thy mind, that both may know it.')

The Monad of Creation - Lyrics