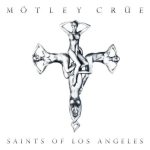 We're the son's of the devil, were the blood on the stage
You can love us you can hate us but we'll never go away...