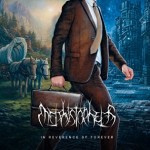 Album rating :  –
Votes :  0
3. The 11th Skywalk Travelstream (4:13)
Here I stand surveying my workstations' progress.
With everything that's happening in my department back at "home" on Kavalizo, I am surprised that things are going quite well;
So well that we are quite far ahead on our calender.

The Office of Z-Phorce Work Relations are quote "Immensely thrilled with the progress", Congratulations Team!

This is the last "walk" that I will work on - I have served my time, and will soon move on.
And when I say soon, I mean a rough estimate of 27 years - give or take a year or so -
You never quite know (they're) tricky things, travelstreams...

This will change 2 worlds; It will be very evolutionary for the planetary inhabitants of the "Target" -
For that world has never been involved in the "Intergalaxy Superstream" that so many now are united by.

It is truly amazing, the universe is truly becoming unified!
This skywalk is very special; It will "reunite" connected "people", that have been apart for so long.

Urzth - a planet in the Sttyll-Quad - (is) actually the mother to a distant world that was "grown" by a group of separatists that left during a turbulent time for the planet, known as the J2-Vass-Era.

It propelled a group of scientists to leave their home and desperately search through "space" for a "ripe" planet, to create a new future for their flailing race; Which they had resolved as to be near the time when the knell of the end-bell was eminently imminent.

So, their vast travels found a planet viable for use, and its habitat was nearly perfect.
So, they settled there, and it began with such high hopes!

Now the Urzthlings they await their 2nd SKY-WALK, to reconnect with their far-away "half-cousins".
In just under 3 decades they'll know one another; It is solely placed on me, I must enable the greatest of all reunions!