Battle of the Sea and Sky Lyrics 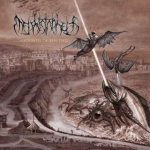 Album rating :  85 / 100
Votes :  2
5. Battle of the Sea and Sky (4:51)
Everything seemed normal then, back before 'they" appeared
Now the whole worlds abuzz; everyone's obsessed with them
All the world's so entranced by these spots in the clouds
I myself am quite enthralled, wanting to know the truth

Why are they there?
And why can't we
Get close enough to them to see what they're made of and what's holding them there
What's causing the field that stops anything from getting too close

How is it the clouds are generating lightning 10 times stronger than usual, and the magnetic field around them means no devices can gather useful information on the state of the black spots and the mystery of why they have appeared
All we know is that they are growing in size

I cannot believe the world is currently home to two freak occurrences
Along with the spots in the clouds there is the darkness spreading in certain sections of the ocean, and akin to the clouds no-one can get close to this to study what's going on as the ocean around it is toxic

- To anything we've made to descend into the water, and (the) emissions from it mean we cannot even get close
But then as I am musing on this, I hear sound coming from above me, I run outside, To inspect the heavens, and my breath it suddenly leaves me for what I am seeing is stealing my sanity I am frozen solid as I gaze at -

Things in the sky giant beasts with wings breathing fire - nothing I've seen before in fiction or told in folklore has resembled what I'm seeing
Then I hear a sound, a cacophony of roars shake the ground - I now find I can move, I run to the top of the nearest hill
From where I stand I (can) see the sea, giants creatures are crawling from it, 6 limbs and giants mouths open, emitting a glow

The battle begins right before my eyes, giants of sea and flying beasts of the sky
A war is being waged and the trophy is
Ownership of this bountiful planet, A worthy prize that both races hunger for, Lightning shoots from the mouths of the sea beasts

Laying waste to many creatures, but there's many missed - the winged beasts discharge fire from their maws, dousing the land and those below, many are fighting one on one, giant bodies, thrashing, tearing, breaking bones, all over our planet the war ensues, collateral damage simply a prelude to our end