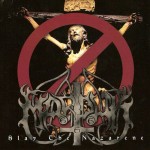 Album rating :  –
Votes :  0
2. Of Hell's Fire (live) (5:22)
I hear the evil calling of the spirits of the dark
And see the beauty and the power of the devils mark
The night always calls my name
Gaze into my eyes and see the shadows of the flames

Write my name with the slaughtered angels blood
As I step in the face of the fallen soldiers of god
All the children of Jehova will always be our prey
Beyond the pearly gates we shall crush, rape destroy and slay