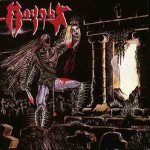 I remember as now, the first victim, my long sharp steel dagger
I hesitated, that was first times, the fear, evil, entrapped my mind
Suffering from death, without a day, I had to kill to live
I asked Psyche, she gave me the sign, I gave a murderous blow

I was so much lost, I couldn't die alone
I wanted to take some people, I wanted to take the world
Trodden by the wicked, I became a killer
Cutlass my confessor, was trustful to me

Dwarfs always strike up an ominous song
A pleasant smell, the smell of blood
The dirty corpses, a killer of souls
A sabbath of nuns began its march
Their king, their lord, a cemetery knife
Proves them to be, the angel of death

The horizon shines, wolfish bastions, the only chance to live
The pilgrims of evil, from the star of the wild dog are going there
Only this wall, the edge of being, will tame the hellish savages
I start today, one shot in my head, this is my place I know