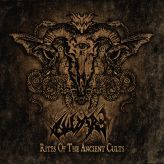 Album rating :  –
Votes :  0
2. Thy Draconian Majesty (6:08)
Hear me dragon goddess of chaos and owner of the perpetual flame!
I’m the witness of the powerful actions practiced in thy name
At the boards where your destiny is carved

Oh almighty mother of the elements, lady of the sky and earth
Of the union with Apsu, the primordial progenitor of the principle,
Results the fluid of the creation!

Hear me draconian majesty, sovereign of the infinite and invisible!
Creator of the universe and gods, the irrational power
Symbol of the unconscious and the great circle of which all contains

Obscure queen of a distant age
When the time of your seal ends, you can once again reign!
Fall asleep and wake her, open your wings and rise up from the abyss

From your creations resulting chaos!
From your actions the destruction!
And your blood will rise the creation!

Rites of the Ancient Cults - Lyrics