Remains of the Gods Lyrics 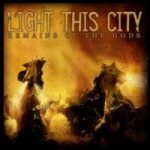 Album rating :  82.5 / 100
Votes :  2
1. Remains of the Gods (4:00)
If you still don't believe that I can restore myself under your crown,
then watch me as I decapitate this serpent head of vanity.
I used to be wary of you,
now I'll make your skin crawl at the thought of me.
You once thought me a fool, but titles change so easily.
As you'll see now, who's the fool and who is king
Who's dying, and who's triumphing
You'll learn your lesson from a monster once defied by none.

And now I'm finally able to say you all share this common trait:
Her heart was cold long before her eyes made her stone.
You'll see; they'll tell this story for ages to come

She didn't see me hovering above her like the halo she abandoned.
Likewise I never laid eyes on the scales of her skin. My dexterity terrified her;
I charmed the blood right out of her neck,
and while her body collapsed to the floor,
I grabbed a hold of her head.
Held it up, dripping, to its own reflection.
And forced her to behold her internal demon.
My battle cry will always echo in her death rattle'

And now I'm finally able to say you all share this common trait:
Her heart was cold long before her eyes made her stone.
You'll see; they'll tell this story for ages to come

As I left, you seemed so certain that I would falter,
but you mistook my confidence for pride.
I never boast of bloodshed unless I have the heads to prove my slaughter.
And with her once writhing skull in my grasp
at long last, and with her wretched,
glaring visage burned into my shield,
and with the knowledge that I'm stronger than you'll ever be,
it's time to regain my throne
I'll cut a crown of serpents from her hair
to replace the one you used to wear.

Remains of the Gods - Lyrics