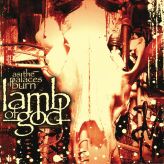 Album rating :  91.1 / 100
Votes :  34
9. Blood Junkie (4:23)
Track rating :  87 / 100       Votes :  5       [ Rating detail ]
A shallow little jackal of a man posing as a hawk.
Conniving opportunist
Lease the blade the gun the bomb in the name of justice.
A violent panacea for what ails the nation
In advancement for the pig.
You'll not wrest the truth from my hands
Eyes never closed clarity.
Clamped down in a grip so tight on ordinary horror.
Peering through a curtain of blood.
Retribution or vengeance it matters not which
As long as the pig stays on top of the ladder of bone his father has built.
Ashes to ashes to the dust
Eaten spiced with ambivalence.
The nation swallows it all whole
Weakened by their collective neck in the noose.
Commerce brings war
Jihad has come to both sides.
Eye for an eye fire for fire
Raining death as the towers crumble.
This will never end.
Left without a choice
By the fiscal elite
War is set in motion by higher powers.
A pissing contest for the unknown.
Left bankrupt we all die inside.
As a couple jumps hand in hand to their death.
Wrapped in swaddling lies and laid in a dumpster
Spoon fed shit doesn't even turn their stomachs.
Gaping mouths yawn for more abuse
Someone needs to tip the nest.
The pig ascends
As I sink deeper
Seething misanthropic
Waiting for my death.
Audio

As the Palaces Burn - Lyrics