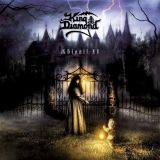 And now I'm looking at his son
A man and his wheelchair, living in the past
No room for life, only the dark

I was so close to the end... I will never forget the coffin and nails
But little Abigail is back again
So young and beautiful, while you are living in the past
A past so dark, there is no room for life itself
And all I see when I'm looking at you
Is where EVIL always LIVED and ruled

You almost killed me... and now you must pay
A man and his wheelchair, living in the past
No room for life, only the dark

Do you even know who the Hell it is
You are keeping in the crypt? ...Do you?"
Fear and twisted hate, then the feeling of being betrayed
Overwhelmed him...
[A:] "That child is part of ME"

He had to get up, get up and out of the wheelchair
But without his cane, Oh he didn't stand a chance
The cane was in her hand, she used it to push him back
Push him in the chest, she was ready for attack
Then a quick blow to his wrist, four five across his back
One last one hit him in the neck
[A:] "I can't believe you're still alive
My God", she screamed, "I'll teach you how to die
This should light up your worthless little life
Open up your eyes"
Then she lit the torch

His eyes were burning pain, she wanted to hear him scream
And this was not a dream
Abigail was out of control
She was laughing at his every scream
This was no more the clean revenge it should have been

Abigail was feeling like the ruler of Hell
The joy of causing pain
The wheelchair was really on fire
In the middle of dying. Jonathan's charred body was
Falling down