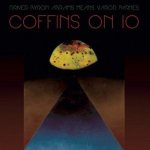 Album rating :  87.5 / 100
Votes :  2
6. Spirit Photography
The fragile photograph cracked and tortured—
Forgotten in its box in the attic amidst
A ponderous flood of memories
The broken lines on her face, the years that have shuffled on
And on through disgust and turmoil
Spiders on the lips of its slow attrition
Knives through eyes that have long since faded
I remember this house like a half-forgotten song
A name on the tip of the tongue
A scar on the tip of the soul
I listen to this demon as it crawls across the floor
Drags itself across the boards and watches me
Lifting up a voice that sounds like witches burning
Scratching along the floorboards with a body gaunt and shattered
I burned them all in effigy
But must have forgotten about
This box covered in dust under the careful watch of dread
Ghouls awash in the tattered finery of
Hapless pain
And withered in the trance Despair
Disguised as agony
Conjure forth the monster sleeping long in stony silence
Roil the waves and rouse their denizen
From an æon of splendid sleep left mercifully undisturbed
Many arms about me, many
Pulling me into the shape and shadow of oblivion
Pulling me apart and gnawing without end
And tell me:
If the eyes of the dead are forced open—
Even for a second—
And the eyes of the dead are allowed to speak
What is the hell they betray, and
What is the nightmare unsealed?
What has this fragment of Reason
To do with the oceans of age?